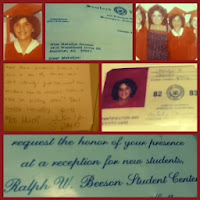 “Back in the day” the requirements to get into college weren’t quite as steep. Thankfully my ACT score was good enough at the time for me to be accepted to Auburn University and Samford University (in Birmingham) – the two schools I was considering. Being in-state made the tuition at AU much less, but at SU minister’s kids received about a 40% cut. I decided to choose Samford, being unsure of what direction I was going in the future … they offered more classes with ministry options and I did know a few people who had attended there and loved it.
I graduated from high school, very happily, in 1982! After a great summer of family times, senior trips, and youth camp, I packed up my stuff and headed off to B’ham. We laugh about it now and my parents feel kinda bad, but I loaded all my stuff in a friend’s car and moved into the dorm by myself. My mom told me later: that’s how I went to college, so we didn’t know any better! I admit that the first few days and weeks were a little lonely and frightening. I didn’t know my roommate (who was a little strange … or maybe it was me who was :)), the people I did know were upperclassmen, and when I chose classes and times I was oblivious to asking anyone if it was a good prof or class. So Monday morning at 8 am I struck out across the beautiful Samford campus to the Science building where I sat in a class of about eight other dumb Freshmen who also didn’t get the advice to avoid this professor … at all cost. I failed the course, but lesson learned. 🙂
After the initial loneliness and dread of the big cafeteria and so many new people, I settled in. College days became some of the best days of my life. God placed me on a hall next door to girls who befriended me and “rescued” me (from my roommate). They included me. Eventually I was able to move to another room on another hall with another roommate, but no doubt I needed to be on that hall to meet those people. God put me there.
I will zoom in on the people and events of college days in the next few posts …
Thank You LORD for leading me to Samford. Thank You for my parents who sacrificed to help me attend there and released me to become my own person. The days there reinforced truths that changed me, formed me, and set me on a path of seeking You for myself all the days of my life.
Here’s a word you can take to heart and depend on: Jesus Christ came into the world to save sinners. I’m proof -Public Sinner Number One! of someone who could never have made it apart from sheer mercy!!