﻿Context is everything! Even a blog post taken out of context can miscommunicate. As a blogger, I understand the difficult task that an author, bible teacher, or pastor has when attempting to concisely present truth. Because of this, I generally read authors rather than books. I follow teachers rather than bible studies. I sit under a pastor weekly, and don’t typically listen to random podcasts. In this way, I get to know the author’s way of thinking and can better interpret statements made that could be misunderstood out of a broader context.
If one was to read my first two blog posts in this series, they could possibly conclude that I believe the bible says we shouldn’t judge one another. And they would be right. I do. But I also believe it says we should.

In judging correctly (biblically), we always begin with the right posture of heart. We view others through a mirrored window. Correct judgment happens only when we humbly recognize our own need for grace, and view others through those same grace-colored lenses. Also, I want to make clear that when I speak of judging someone, I’m referring to those within the church, not people living apart from Christ.
Paul said “For what do I have to do with judging those outside? Are you not to judge those inside? But God will judge those outside.” 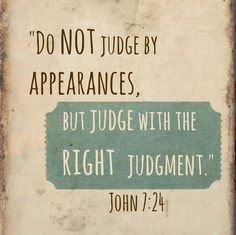 So, even with the awareness of my own great sinfulness, I believe there are times when the family of God is called to loves each other enough to practice accountability. The bible indicates that there is a time for righteous/proper judging (John 7:24). Wrongly judging someone is when I ignore my own sins, while looking down on others. Jesus called that hypocrisy.

“You hypocrite! First remove the beam from your own eye, and then you can see clearly to remove the speck from your brother’s eye.”

The same author who went to great lengths to communicate that we are drowning in God’s grace recognized that there would be a temptation to trample that amazing grace by dismissing our call to obedience and holiness … there would be a temptation to call black and white grey. In the name of liberty, disciples of Christ can misunderstand grace. It was not to be used as a basis for “flaunting freedom.” We’ve always had the freedom TO sin. The law made sure of that. But with grace came a new freedom – a freedom to NOT sin. The law is not evil, but it does reveal evil.

In His attempt to communicate why He came, Jesus told the crowd on the mountainside that it wasn’t to abolish the Law but to fulfill it. In and through Him, we are able to recognize what grace really is. Not a freedom to sin, but a freedom from sin. Not a freedom from obedience, but a freedom to obedience. As Jesus people, we are to help each other navigate this grace life we are called to live.
Oh, what a wonderful freedom this is that we have in the resurrected Christ. What I once was bound to obey, I’m now actually free to obey.

“Since Christ has been raised from the dead, He is never going to die again; death no longer has mastery over Him. For the death He died, He died to sin once for all, but the life He lives, He lives to God. So you too consider yourselves dead to sin, but alive to God in Christ Jesus.”

When mixed with grace (displayed by our humility), judgment is sometimes necessary within the body of Christ. It’s ok to expect holiness from others, as we do ourselves. There is a time to “remove the speck” from the eye of others. In the church, we are to come alongside one another and encourage dying to self and sin.

There is such thing as right judgment.